Learning to Listen in a Loud World

We live in times when the visual is paramount- look! A celebrity got a new haircut! On the red carpet, who are you wearing? It's what you see that is deemed important. Think of Lady Gaga's meat dress…or Bjork’s swan outfit. Now think about this – why did they choose that look? Or get that haircut? Perhaps it is a need for attention, that desperate inner child saying “Look at me!” Or, perhaps it is part of an image they are trying to create, or a message they want to get across to their fans. Rarely do the entertainment reporters talk about what is going on inside a celebrity's mind, explore the motivation for why they look the way they do. They just focus on the pageantry and entertainment value.

We, too, tend to work this way - by first judging people on their appearance, then, if we are deep-thinkers, delve deeper later on.

What is a radio play?

When you tell someone, “We are doing a radio play,” they may have a difficult time understanding what that means. They might think, “Oh, is it being broadcast on a radio station?” Hmmm... They understand traditional radio is primarily about words, the sound of a voice, not a visual medium. So they are skeptical. "Why is a theater group doing a radio show? Is this something I would like?"

“Yes!” I tell them. The way a radio play is presented is both visual AND audible! It’s on a stage, where not only you can hear the voices, and experience the characters, but you can also see the actors - just like the studio audiences did during the heyday of radio when it was the primary form of home entertainment. The radio play genre hearkens back to a simpler time when folks sat around their radios together to listen to the next installment of their favorite program. Many folks have happy memories of these programs, which is part of the reason why this form of theater is still valid today. Because it is such an interactive form of entertainment, the live re-enactment of these programs can entertain even today’s most restless audience.

A Glimpse into the Past

Because this method gives the audience a chance to not only hear the story as performed by the actors, but see them, their facial expressions, body movements, the audience gets an inside peek into the past, how the performers of old would have done it. Also, they can get a glimpse into how an actor transforms from one character to another- first playing a young lover in a romantic scene, next perhaps a quirky comic character in a comedy, or an old man or woman- even an animal at times! You have a combined audio and visual experience wrapped up in one piece.

View from the Director's Chair

Some might think not a whole lot of serious acting goes into a radio play, but quite the opposite is true. In fact, when I directed War of the Worlds: the radio play, I had some preconceived notions of how the characters should sound. During the rehearsal process, I was surprised and amazed by what the actors brought to the roles. Not always what I envisioned at first, but when I let myself be receptive to their take on their character, it opened up a fresh perspective on the whole piece! The more I let the actors find the core of what made their character behave the way they did, the deeper and more meaningful the piece became. This let the audience really experience the work for what it was – a timeless commentary on our world, that we are not alone in this vast universe. Richard Pierson, the Professor who is called in to deal with the Martian invasion, experiences a major transformation in the piece. He goes from being much insulated in his academic world, using only intellectual capabilities, to realizing at the end he cannot exist in a vacuum – he needs to interact with all life on this world and others. His horizons are broadened and he is a better, more caring person for his experience. In the staged version, not only does the audience go with him on this journey by hearing his words, but they are able to see his face and body language that expresses the changes he goes through. 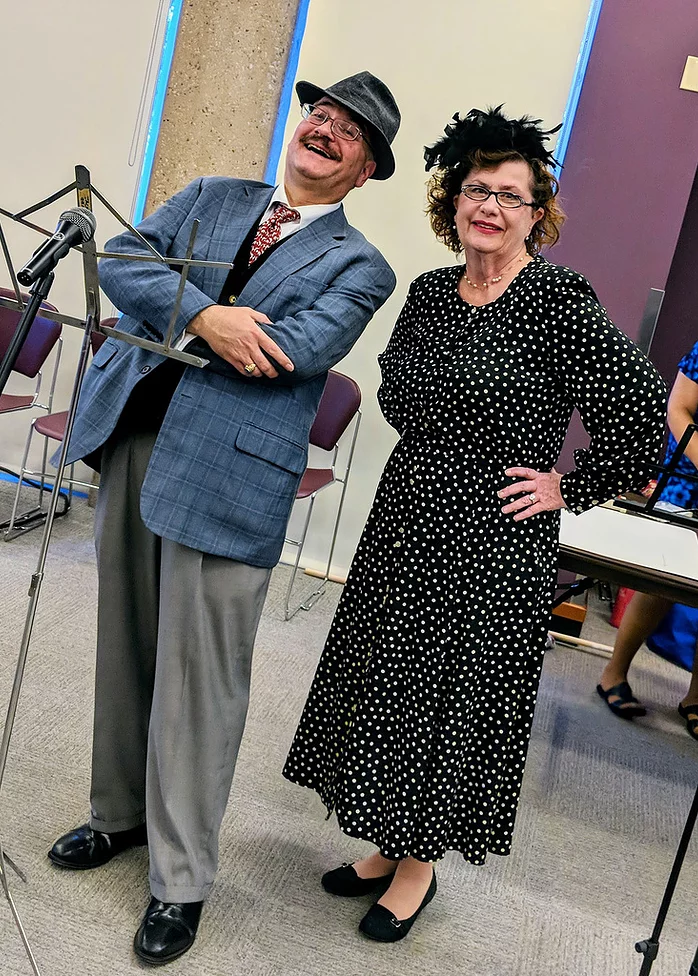 What's in a Name?

There is flexibility in character interpretations as well. Just because a character is a classic, doesn’t always mean you must adhere to what has come before you. When I started working on Molly McGee in “Fibber McGee” I began by playing her close to my normal speaking voice. But the more I worked on the part, I discovered a lilt, and she became Irish! It just worked, both with the dialogue and as a counterpart to Fibber. Luckily, the director let me run with it, and I felt that made her stand out in a way that a so-called “straight” voice did not. The fun of discovering your character’s voice, whether they are from the Bronx, the backwoods of Alabama, or a high-society co-ed is something the audience also gets to enjoy.

Close Your Eyes and Listen

In this visual-centric world, do people know how to listen? Really listen, not just to the words, but to the deeper meaning behind them? Or does the sound just float on by, without landing into their mind and soul, making an impact? A staged radio play can give you the best of both worlds. A well-written radio script, specifically made just for ears to hear, becomes something even greater, as the audience gets the experience of seeing actors working at their craft. A little of the old, blended with the current, for today’s audience. But maybe, while you watch, just close your eyes for a minute. Take in the words. Listen. Think. Enjoy.

New Beginnings, Risk-Taking and What’s in Store for TesserAct in 2019 and beyond

Audition Tips, Part Two: How Not To Freak Out on Your Big Day

Based in the northwest suburbs, TesserAct Theatre Ensemble is a 501c3 Illinois non-for-profit corporation, founded in 1993 by Artistic Director, Tamara Jackson-Kist.

The name of the company was inspired by her favorite book from fourth grade, A Wrinkle in Time, by Madeline L’Engle.